Albania will pay to CEZ 95 m Euros for CEZ Shperndarje

Albanian government reached an amicable solution with Czech energy giant, CEZ, the Ministry of Economy and Energy announced today. Damian Gjiknuri, Minister of Economy and Energy said in a press conference that his government will repurchase the Albanian electricity distribution company for 87.1 million Euros paid in four installments plus 7.9 million Euros in interests for a total of 95 million. END_OF_DOCUMENT_TOKEN_TO_BE_REPLACED

That propaganda slogan that still holds 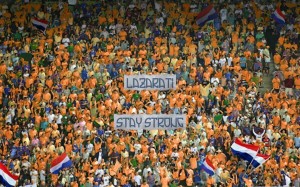 In the 1970s, when the US was fighting in Vietnam, the communist government of Albania created some of the funniest propaganda slogans. One said: “Mbahu Vietnam” – Hold on Vietnam. Another said “Vietnam, nuk je vetëm” – Vietnam, you are not alone. END_OF_DOCUMENT_TOKEN_TO_BE_REPLACED 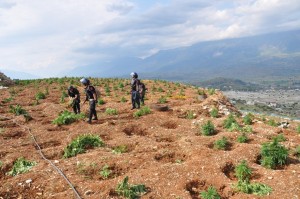 Albania police forces reached the outskirts of Lazarat Village on the second day of their all out offensive against marijuana fields, while four people, including one police officer were injured in the fight. Advancing slowly from south, dozens of full gear police officers reached the first neighborhood of the notorious village and started a house to house search. END_OF_DOCUMENT_TOKEN_TO_BE_REPLACED

More than 500 police officers exchanged fire with drug traffickers as they launched a crackdown on the outlaw marijuana-growing village of Lazarat in southern Albania.

The European Commission report on progress of reforms in Albania gave a positive note to the Government of Albania and recommended to the European Council to assign Albania the status of Candidate for Membership country. END_OF_DOCUMENT_TOKEN_TO_BE_REPLACED

Students from the Polytechnic University and the University of Tirana protested on Monday against the new proposed scheme to finance higher education.

Rights groups have called on President Bujar Nishani to veto amendments to a property legalization law which does not recognize shacks in which many Roma live as ‘proper’ constructions. Gjergj Erebara BIRN Tirana END_OF_DOCUMENT_TOKEN_TO_BE_REPLACED